The full summer service is now on offer from Blue Star, right up to the end of October. The old customer-friendly timetable has disappeared from their website and now you need to use the online booking tool to see when the ships sail. You do not have to actually book anything to use it!.
So the usual pattern of calls at Symi on Mondays, Wednesdays and Fridays will continue this year – southbound to Rhodes in the morning, northbound to Kos and Piraeus in the evening. The actual times on those days vary according to the time of year, so you will need to use their website to check the date(s) you want. In terms of ships, the Monday sailings will be done by Blue Star 1 until late October, and the others will be Blue Star Chios until late April, then Diagoras (once the regular ship for Symi services) appears for a month, and finally in late May Blue Star Patmos reeturns for the rest of summer.
The swapping about of ships is to cover annual overhauls. The Blue Star Patmos is currently in the dockyard in Malta having exhaust gas scrubbers installed to reduce pollution, a fairly major job – the actual overhaul was carried out in Greece as usual.

Gerry Allen has kindly supplied a review of an overnight crossing from Piraeus to Symi on Blue Star Chios, which I’ve never done on this particular ship. “Patmos definitely better ship; Chios older cabin same size but en-suite much smaller; there is a vast amount of Airline style seats; public toilets not as good as Patmos; usual cafes and restaurant but no a-la-carte; ship was clean and tidy just older plenty of staff”
So everyone will be happy to see the Blue Star Patmos back in late May! 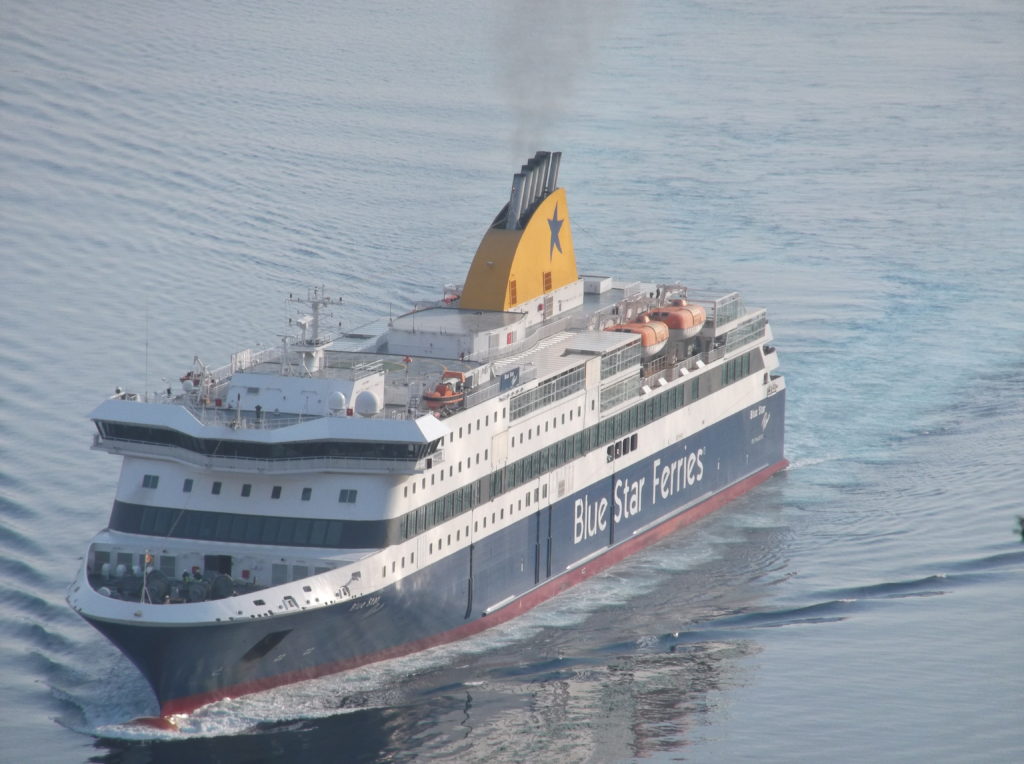 In other shipping news, Ostria (the old Symi I) has completed her annual overhaul and returned to Agios Nikolaos, Crete, which is her base for summer day excursions, and the Sebeco II (yes there are two of them) has secured a licence to operate between Kamiros Skala on Rhodes and Halki for the summer. So don’t think the original Sebeco has deserted the Symi-Rhodes route if you hear talk of a similar ship in Halki. What we don’t know of course is what timetable either Sebeco will operate yet. Once we have that for the Symi route, I’ll produce a combined timetable as usual.