The Sebeco was due to finish her summer on 31 October, and tickets were sold up to that date.

Now ANES have decided to cut things short,and the last day for this year will be Monday 28 October, Ochi Day.

Passengers with bookings for 29, 30,and 31 October should have been contacted by now. If you have a Sebeco ticket for those dates and ANES haven’t been in touch, you should contact them, or the agent you bought the ticket from. 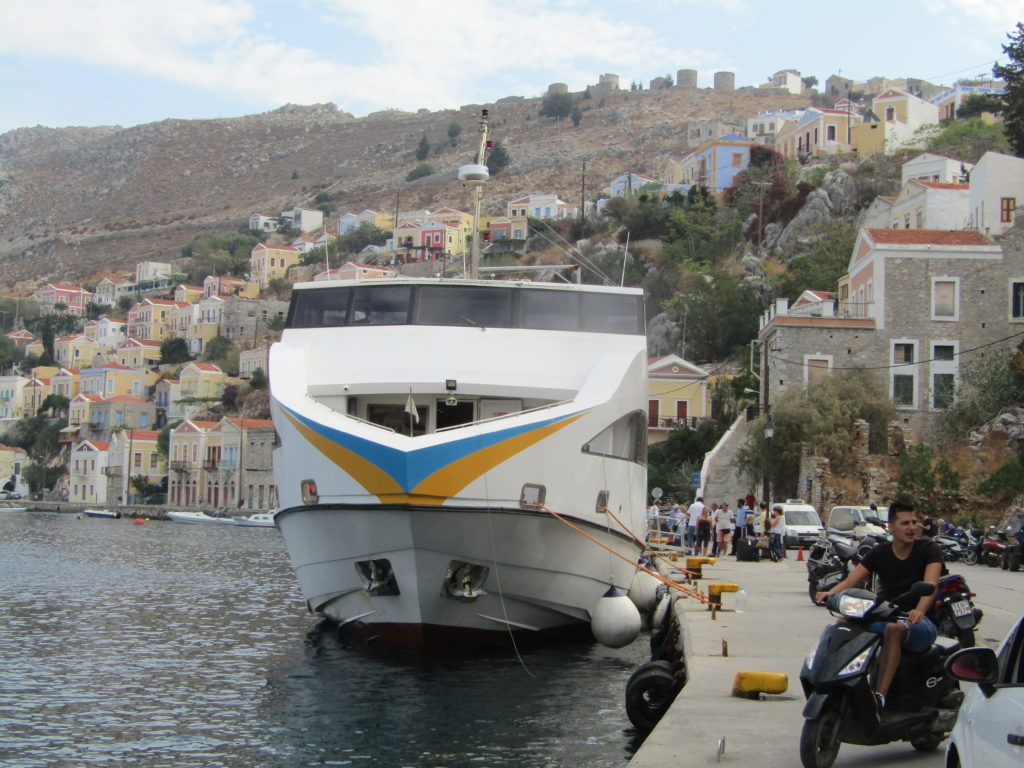 I’ve had lots of requests for details of ferries to/from Symi in the winter. The ferry companies are never in a hurry to release timetables as nearly all the passengers are local and don’t have the same desire to book months in advance that some tourists do.

However, Dodekanisos Seaways have released their sailings for the period 1 November to 31 March. You’ll find the timetable here:

Blue Star Ferries have yet to publish the timetable, but the booking system shows that there will for the first time be three ferries each way a week all winter. The Blue Star Patmos will leave Piraeus on Sundays, Tuesdays, and Thursdays, operating overnight and reaching Symi on Monday, Wednesday, and Friday mornings. As expected she then continues to Rhodes and onwards to either Kastellorizo or Karpathos (Wednesdays). Then she returns the same day, leaving Rhodes for Symi and islands beyond to Piraeus at 16:00 (Monday), 17:30 (Wednesday); or 19:00 (Friday). The exact pattern of islands served is different on each day of the week, but they all call at Kos.

The final piece in the UK repatriation jigsaw is in place. Passengers who had bookings for Sunday 6 October on flight MT1887 from Kos to Birmingham should by now have been contacted directly by the Civil Aviation Authority to be told what alternative arrangements have been made for them. This obviously means that there won’t be a specific repatriation flight for them, and instead they will be given tickets on other existing flights from Kos to the UK (maybe involving a flight connection along the way, and maybe with a road transfer at the UK end to get to Birmingham), or maybe on a different day, such as Saturday.

So to round off the Kos story, there will be nobody left on Symi after Saturday with Thomas Cook Airlines flights to the UK who is entitled to a repatriation flight, except a tiny number of people with flight-only bookings issued with an ATOL certificate – there were very few of these, and probably none at all on Symi. Those that there are will be contacted directly by the CAA with details of alternative flights home.

Anyone who has a package holiday from another operator, or one tailor made for them by a specialist travel agent, which included Thomas Cook Airlines flights from Rhodes or Kos will have been contacted by now with alternative flight details.

That leaves people with flight only bookings. Sorry, you’re on your own now. You may be able to claim a refund through your credit card issuer (if you paid by credit card and the total was over £100).

Condor continues to operate normally. It’s been pointed out to me that Thomas Cook Scandanavia isn’t operating anywhere near as normally as it claims, with a flight from Oslo being 36 hours late into Rhodes this week.

The next set of repatriation flights to the UK have now been announced:

From Rhodes there will be a flight to Birmingham at 01:05 on Sunday 6 October, EuroAtlantic Airways flight YU1883. This will also carry passengers originally booked to Gatwick on 5 October (sounds dreadful, but the Gatwick flight was at 23:40 so departure is only 75 minutes later), as well as the Manchester passengers from 6 October. Road transport will be provided from Birmingham to Gatwick and Manchester.

For those who don’t know, EuroAtlantic is a Portuguese airline specialising in short-term charters like these.

This completes the flights from Rhodes. Anyone holding  a Thomas Cook ticket from Rhodes to the UK dated 7 October or later and needing to return to the UK, will have one of three options:

If they were on a package holiday provided by a tour operator other than Thomas Cook, that tour operator is responsible for getting them home, and has probably already been in touch about it.

Or, if they have an ATOL certificate issued by Thomas Cook, the UK Civil Aviation Authority will be responsible for getting them home. They will be given tickets on other existing flights, and the CAA will probably have already been in touch with them about it.

If neither of these applies to you, sorry, you’re on your own and need to arrange your own flight back. You may be able to recover some or all of the cost from insurance or a credit card issuer if you paid by credit card and the cost was over £100.

There’s still one flight from Kos where details of the repatriation flight has not been released yet, once that is done, normal blog service will resume.

The next batch of UK repatriation flights:

Thursday 3 October: For Rhodes flights see my previous blog post. For Kos flights. the Gatwick flight will operate as  originally scheduled, with an XT (Titan) flight number. This flight leaves at 17:00. Passengers for Birmingham and Manchester will also travel on this plane, with coach transfer onwards from Gatwick.

To help passengers due to return after 6 October, those people on Thomas Cook packages whose return flight was always due to be with Easyjet will still be able to use it up to the end of October as booked, as Easyjet will honour the original bookings. Quite a few TC packages were sold using Easyjet flights this year. Nobody would have bought a “flight only” from Thomas Cook Airlines including an Easyjet flight, but as far as I know, if they’ve been daft enough to do it, Easyjet will honour it too.

Why would they need to have been daft to book it with Thomas Cook Airlines? Well, nobody selling flight only tickets can undercut the websites of low cost carriers such as Ryanair or Easyjet, and while occasionally it seems they have, this is due to obsolete prices being displayed by the seller, or fares being offered that don’t include essentials so more money has to be paid later. Different with packages, because there are other items such as accommodation, transfers, car hire etc bundled in, and you only see the total price.