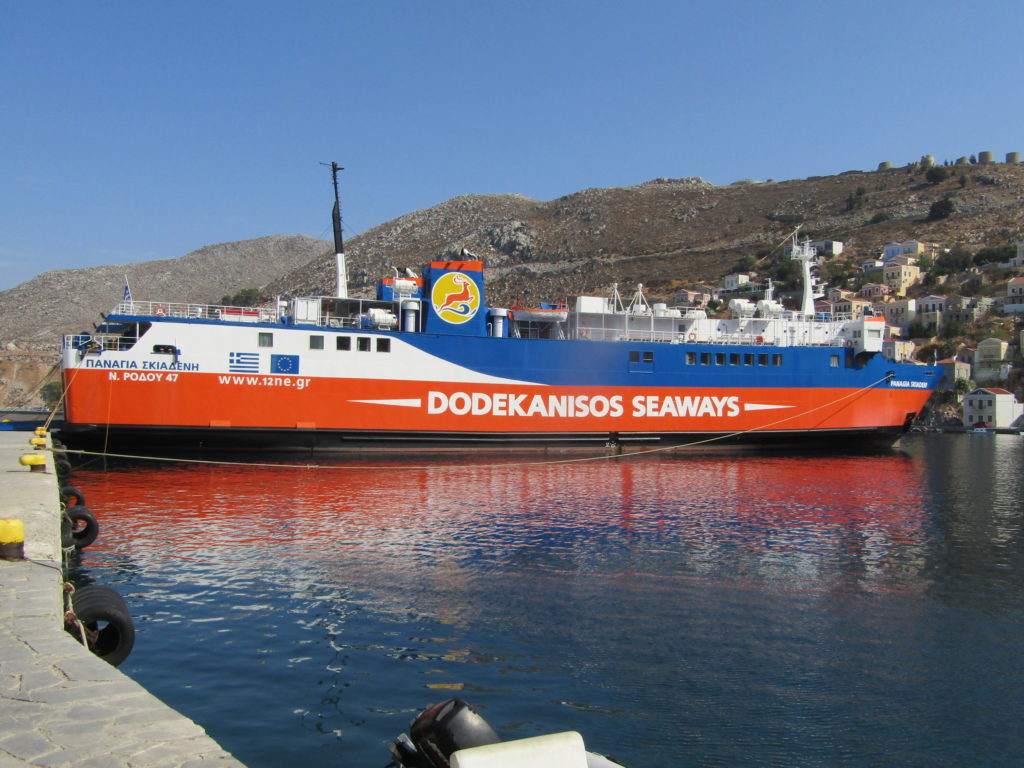 There are some changes in the Blue Star Ferries fleet: The Nissos Mykonos and Nissos Chios have been repainted into Blue Star fleet livery and renamed Blue Star Mykonos and Blue Star Chios. The Chios has been a Symi regular for part of each year recently, in Hellenic Seaways livery with a large “operated by Blue Star Ferries” sticker. Blue Star and Hellenic Seaways are sister companies and this represents a change to using the much stronger Blue Star brandname for conventional vehicle/passenger ferries. I don’t yet know if any internal changes are being made – she’s in annual overhaul at the moment but will take over from Blue Star Patmos on the Symi routes from Tuesday evening’s departure from Piraeus, which appears at Symi on Wednesday morning. Hopefully we’ll know then, and photos will soon surface.

While I’m on the subject of ferries, I seem to be seeing even more people asking about summer timetables than usual. I can see why people would want to know if they need to overnight on Rhodes or Kos before or after a Symi holiday, if they’re booking rooms too, but most Symi and Rhodes accommodation owners/hoteliers are reasonably flexible, they know what the issues can be.

For Brits, I’ll just point out that it is impossible to find accurate train or bus timetables more than 12 weeks in advance, even to prime tourist areas, so expecting Greek public transport to be different is illogical.

This year the timetables are likely to be later being issued than last year. But the 2019 summer timetables were issued exceptionally early, and this year is getting closer to the norm. The problem in 2020 is that a lot of the ferry routes in the Dodecanese islands are subsidised. The contracts have to go out for tenders, as you’d expect, and the Greek Government has been late in calling for tenders, and in addition is trying to change the established service pattern for some islands. The tenders aren’t due back until 5 March, then they have to be reviewed and contracts signed. Only then can the ferry companies issue timetables, since they simply don’t know if they’ll get the contract or not. Often the same ship will operate subsidised and non-subsidised services on successive days, or even the same day – this affects both Blue Star and Dodekanisos Seaways. ANES don’t get a subsidy for Rhodes-Symi, but they have been bidding for other routes, and in any case they are always later than the other two companies.

Blue Star have however announced their summer Monday Symi service, operated by Blue Star 1, as none of Blue Star 1’s sailings are subsidised, and this is bookable, in the event that anyone is so obsessed with nailing down every detail that they want to make interest free loans to shipping lines. However, Greeks just seem amazed by the idea that anyone would want to book a ferry six months in advance, before they know what alternatives are available. Unless you want the most de-luxe cabin on the ship for a journey to/from Piraeus, in August, it really isn’t necessary to book far in advance, and if you’re travelling only to/from Rhodes, this is a huge ship and is never full over that section of route.

There’s no reason to suppose that there won’t be daily service to and from Rhodes this summer, the issue is only which ferry and at what time. If you want to travel elsewhere in the Dodecanese a little patience is going to be essential, I’m afraid.