The situation is still moving fast, and some media outlets are not helping by posting speculation as fact. As of today, flights from the following countries will be allowed to operate to either Athens or (new) Thessaloniki, and passengers connect to domestic flights, ferries, or land transport, starting 15 June:
Albania, Australia, Austria, Northern Macedonia, Bulgaria, Germany, Denmark, Switzerland, Estonia, Japan, Israel, China, Croatia, Cyprus, Latvia, Lebanon, Lithuania, Malta, Montenegro, New Zealand, Norway, South Korea, Hungary, Romania, Serbia, Slovakia, Slovenia, Czech Republic, Finland.
Nationality is irrelevant, it is departure point that matters. There will be no requirement for travellers to take a coronavirus test before leaving for Greece, or to quarantine on arrival in Greece. This list is based on the success these countries have had in minimising the rate of new infections. Additional countries may be added to the list in mid-June to take effect from July if their governments manage to get the virus situation under control by then.

Now this list is not as generous as it seems, not all these countries have ever had flights to Greece, and some still have a total international flight ban.

From 1 July flights from countries on the permitted list (including any that have been added by then) direct to airports such as Rhodes and Kos will start. But the chances of the flight programme originally announced for summer operating, even from the countries permitted, is small. Some airlines have closed down since the crisis started (for example Ryanair has just closed its subsidiary Laudamotion, based in Vienna). I’ll try and produce a new set of flight schedules as soon as things settle down – guess why I never finished this year to begin with!
Air passengers will be required to wear facemasks, and food and drink will not be served on board flights to/from Greece

Just to add a few updates – on Symi itself the bus services are back, ferry services are gradually increasing from next week (but you’ll need a face mask there too).
Two more Symi businesses that are sellng by mail order are Medusa (clothes, shoes etc) and Marcia Whitworth. You’ll need to contact them via Facebook. 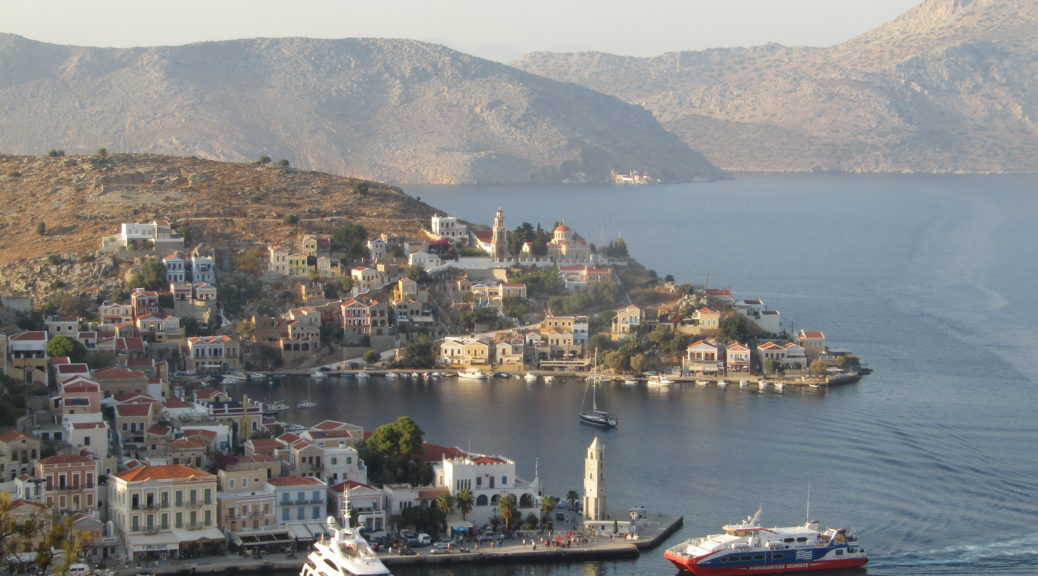 Quite a few people are asking me this. The problem in answering is that the situation changes almost daily, and the answer is different depending on which country you’re starting from. Then of course there’s the question of how much of the Symi you’re expecting (apart from the scenery and buildings) will be available.
Let’s tackle the last bit first the situation on Symi:
All year round hotels (which Symi doesn’t really have) will be able to open from 1 June. All hotels, and holiday apartments, will be able to open from 15 June.
All the shops on Symi are allowed to open now along with hair and beauty stylists, though not all have, because there are no tourists. Social distancing is required.
You are allowed to move about freely on the island, but should not form groups of more than 10 people, maintaining social distancing even then.
Serviced beaches will be allowed to open from 25 May. Again, how many actually do depends on the beach operator’s estimates of demand. Sunbeds/umbrellas must be spaced in line with social distancing rules, (no more than 2 to an umbrella, and umbrellas at a fixed distance)
Beachbars and cantinas must not offer service at the sunlounger, or sell alcohol, or anything eatable other than prepacked food. Now how this affects Symi isn’t clear in that some of the food/drink at beaches is provided by full-service tavernas (which are also allowed to open from 25 May)

The bit in between the airport and Symi:
Taxis follow the same rules on Rhodes as on Symi, and there are buses. This week ferries are not allowed to take you to Symi unless it is your permanent residence or you are on official business – and you’ll have to fill out forms before boarding, so allow extra time.
From next week people will be allowed to travel to islands from other islands or the mainland, again with health declarations and reduced ferry capacities. More ferry departures may start soon, very much on a week by week basis.
Will I be allowed into Greece from abroad?
If you have a Greek passport or permanent residence, yes, with tests and quarantine, right now. International flights will resume at the start of June, but until 1 July, the only entry point for travel by air will be Athens (UPDATE – plus Thessaloniki from 15 June) , and there will only be flights from countries considered low risk for COVID-19. From 1 July onwards there will be international flights into Rhodes, Kos and other airports, still subject to the low-risk assessment. Plans for quarantine on arrival, and for CV19 testing before departure, have been dropped as unworkable in practice. The Greek government has announced that they will not decide which countries’ flights to islands will be permitted until mid June.
Will my country let me leave for Greece, and/or let me come back without a fuss?
Who knows, this keeps changing too. At the moment for example, it is illegal to go from home to the airport for a leisure trip in the UK (though if stopped, just tell the police your name is Cummings), and travel to foreign countries is contrary to official advice, meaning that travel insurance is invalid, but you now can come back again without any hassle – it has been stated that returning travellers will face 2 weeks quarantine from a date yet to be announced, although some countries may or may not be exempt. Other countries appear to have more idea of what they are doing, but everything is subject to change if the infection rate rises or falls rapidly.
Will my flight even operate?
Some airlines have cut back flights drastically, some airports are closed indefinitely, there won’t be flights if people aren’t allowed to use them. Wait and see, I’m afraid.

But I really miss Symi
Well, some Symi businesses have started on-line retail operations, to salvage some of the otherwise missing trade, and will ship to your home. The first I know of is Panormitis Sponge Shop, which now has an online operation.
The website is well-designed, prices are much as I remember them from last year, and you can pay using Paypal. I placed an order this morning, easy to do, and the sponges etc have always been high quality. Expect more Symi retailers to do this. Please let me know if they do – it’s a way of making sure they’re still there to serve you in person when you finally do get to Symi. 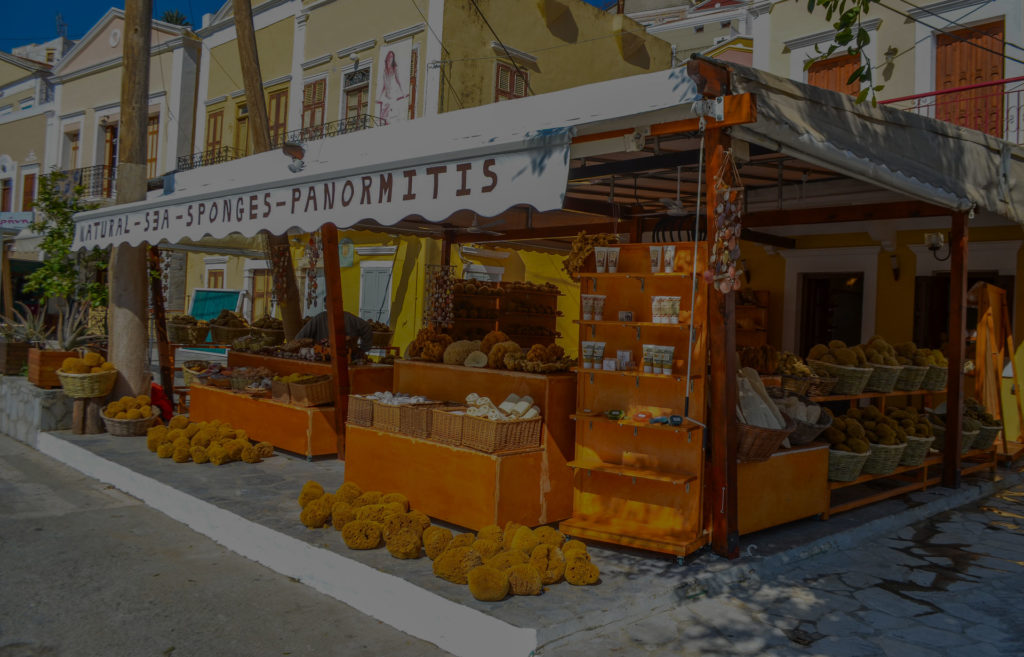 Yesterday a SAOS Ferries ship called Stavros called at Symi on her way to Kos. This is a new route, opened at Government request and with heavy subsidy. The contract is for two sailings each way per week, routed Rhodes – Symi – Halki – Tilos – Nissyros – Kos and return. The Stavros is renamed from the SAOS II, and is a smallish, slowish, conventional vehicle and passenger ferry. The belief within the shipping community is that the subsidy is so large that the route will make money even if nobody uses it. Current plans are to operate Rhodes – Kos on Monday and Thursdays, returning on Tuesdays and Fridays. On other days there will be a Rhodes- Kastellorrizo round trip, operating twice a week, leaving one rest day. The subsidy level is such that Kastellorizo permanent residents (not visitors) have been offered free travel for the rest of the year between there and Rhodes and back. Unfortunately no such offer is available for residents of other islands.

SAOS Ferries have a certain reputation in the North Aegean, and it isn’t a good one. This is one reason for the ship being renamed, management would say it represents a new beginning, cynics that it is to try and bury the allegations of cancellations and delays in previous years.

Photos exist of Stavros mooring at Symi Clock Tower yesterday, but I understand that all future calls will be to the new quay area that Blue Star also use, and where the direct road link to the Chorio road is well under construction.

The blog will resume more frequent postings now that Greece is slowly emerging from lockdown – there was no point in reporting when only permanent residents of Symi were allowed to travel there, but this starts being relaxed during May. Before anyone asks, tourist accommodation will not be allowed to open before 1 July, and there is no information yet as to when international flights to Rhodes and Kos will be permitted, and under what conditions. It does seem likely that when they are permitted, not all countries will start on the same date, depending on the degree of progress in each country of combatting COVID-19.