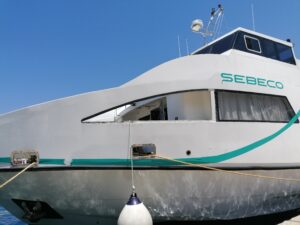 There are two changes to note about Symi’s ferry services (already).

Firstly, the Sebecco has now shifted departure point in Rhodes to Kolonna. It was always the intention to do this, and the website claimed all along that this was where she left from. However up to early June she was using the Tourist Port, until a ticket hut could be put in place at Kolonna and connected up to power, data and phone services. Indeed I used her in May and left from the Tourist Port, but now Kolonna is the place to go. One odd point – on Tuesday afternoons in June one the sailings (but not the morning ones) reverted to the Tourist Port. This was probably due to congestion in the port generally.

The other change is that the Stavros has returned to service after her annual dry-docking and inspection, using a changed timetable. Now she sails Rhodes-Symi-Tilos-Nissyros-Kos on Mondays and Wednesdays, continuing to Kalymnos on Mondays and Astypalea on Wednesdays. In the reverse direction she operates on Tuesdays and Thursdays.  While I’m sure she will continue to operate twice a week in each direction through September and October, the current timetable only goes up to 12 September and it would be unwise to assume that days of the week and times might not change again after that.

So here are the timetables so far:

16 thoughts on “Another ferry update”